How is your powerhouse & stability at the moment?

In part 1 of our Physio-Pilates Blog, we dived into the history and origine of the Pilates-Method. In part 2 of this serie, we will start giving you basic principles to apply in your daily Physio-Pilates routine, as well as the basic exercises to start with.

The Origine of the Pilates Method

We know Pilates is a form of physical exercise that focuses on posture, core stability, balance and control, strength, flexibility, and breathing. This whole method was developed by Joseph Pilates (hence the name “Pilates”).

Joseph Pilates was not born in Greece, but in the early 20th century in Germany. He invented his method of training, when he saw the soldiers at the hospital during World War One, in the UK. He believed that exercise would improve their health and wellbeing. And yes, he was totally right about that! You could say he was far ahead of his time. It took some years to finetune his method.

But it took a long way to finally became well known and used in fitness and healthcare centres all over de world. And it took even longer to be implemented as a rehabilitation method in physiotherapy clinics. 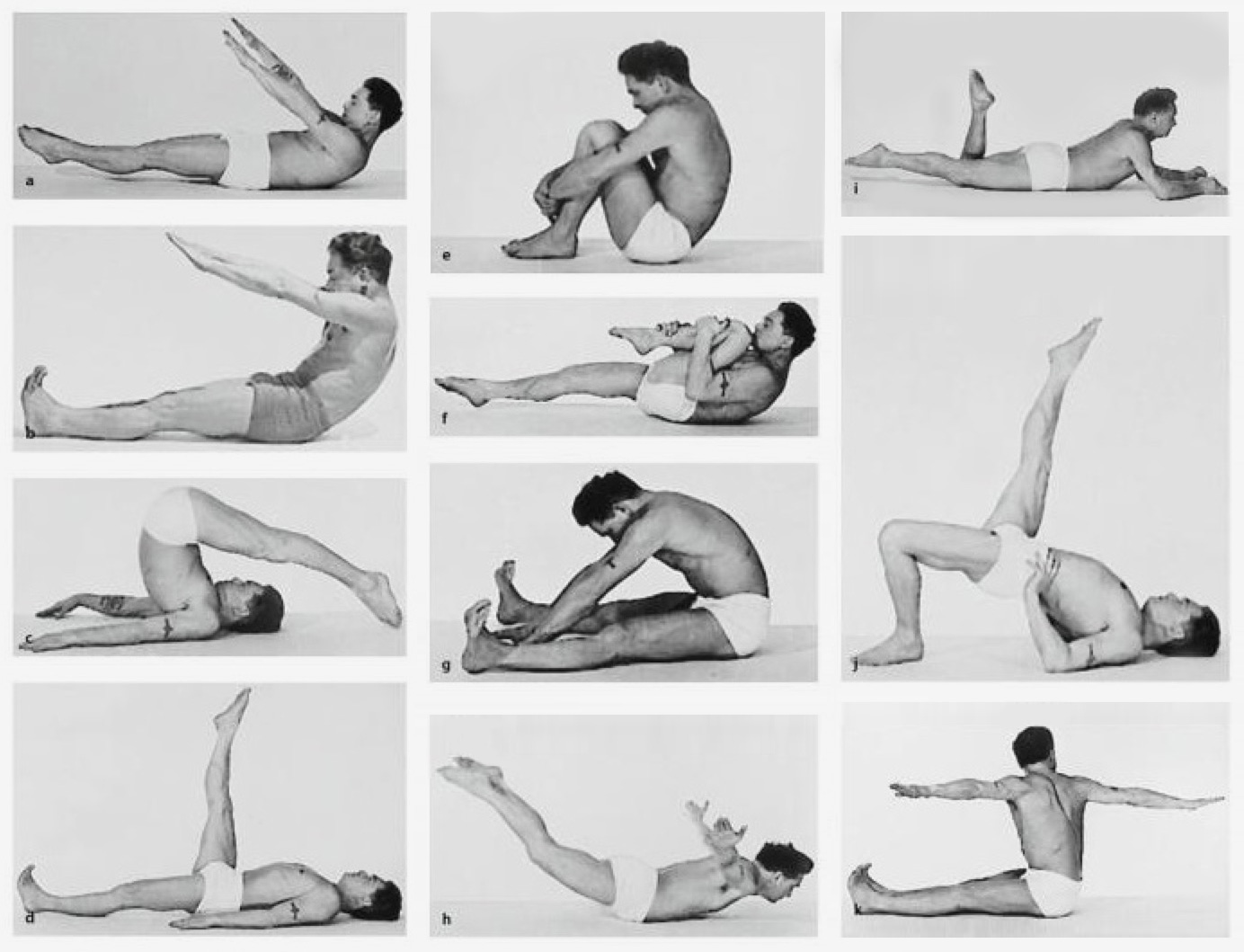 He focussed on training the “Powerhouse”, which is the local abdominal muscles, the diaphragma and pelvic floor muscles together. This helps to stabilize your whole body and posture in different positions. 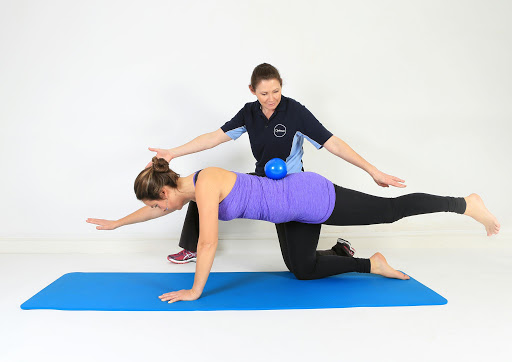 The Origine of Physio Pilates

Physio-Pilates is a specific form of Pilates, for patients with multiple injuries, like backpain, neck- and shoulder issues and hip irratibility. This healthcare form of Pilates ensures good programming by a physiotherpaist:

The physiotherapist identifies key issues to focus on and carefully selects exercises to increase local joint and muscle health, as well as global mobility and stability.

The focus will always be on re-training the PowerHouse and finetune the coordination of the Pelvic Floor muscles, Abdominal muscles, and Back Muscles and your hip muscles.

Diaphragma: But the base of it all is your diaphragma. This is the reason why you will always start with breathing exercises (to activate a good diaphragma function) and by looking the Neutral Spine (which activates the local abdominal and pelvic floor muscles). 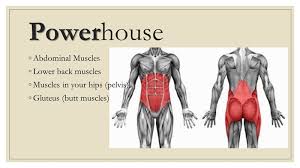 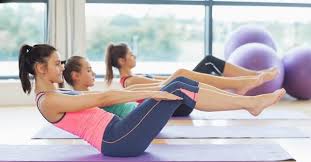 There are 6 basic Pilates principles that need to be applied to all Pilates exercises to ensure maximal benefit. These include:

Focus on correct performance of each Pilates exercise and the specific muscles involved.

Focus on achieving neutral spine and activating the core stabilising muscles (pelvic floor and transversus abdominus) to support the lower back and pelvis.

Maintain optimal posture and control with all movements.

Work smoothly and efficiently with all movements.

Perform each Pilates exercise with attention to detail to ensure correct technique.

Maintain relaxed, normal breathing throughout all Pilates exercises. Do not hold your breath.

an excellent method for rehabilitation 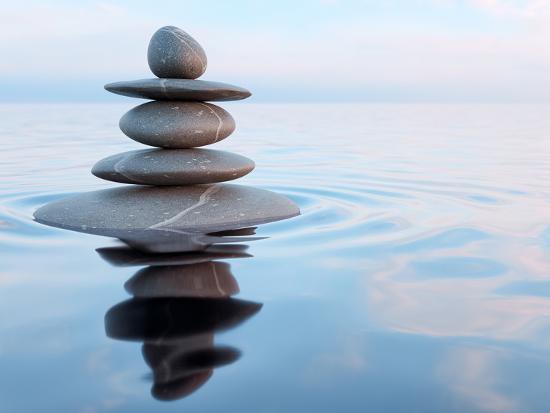 Folow us on social media for information about health, training and nutrition. 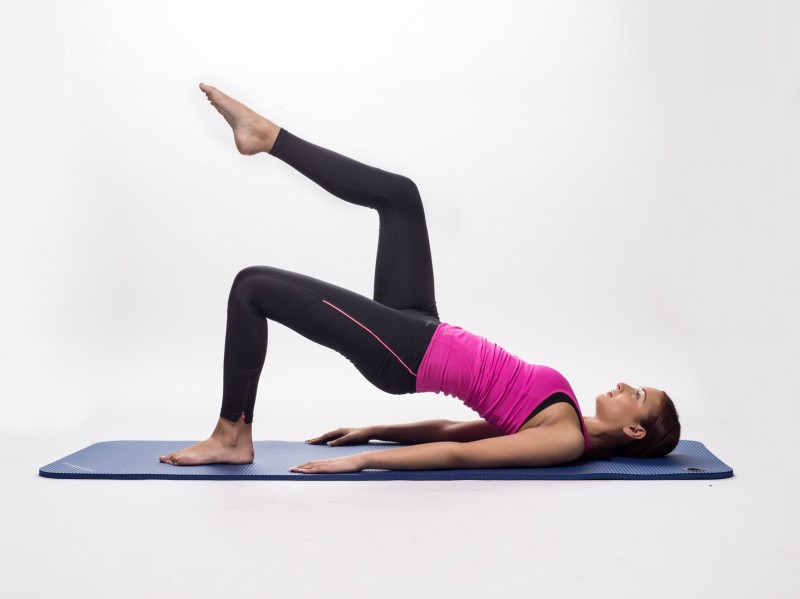 to ensure correct performance of all Pilates exercises,  it is essential that you are able to achieve “Neutral Spine” (optimal posture) and activate your deep stabilising muscles correctly (Transversus Abdominis & pelvic floor).

Learning these Pilates principles prior to commencing Pilates exercises and applying them to each exercise is vital to ensure maximal benefit.

Neutral Spine refers to the position whereby your spine is in optimal posture and alignment. Generally, neutral spine can be obtained by ensuring the following: 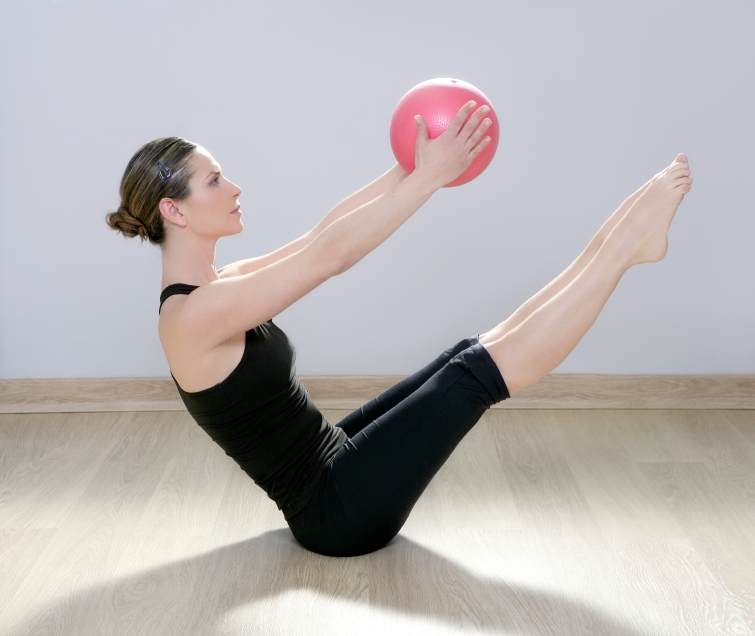 We believe in tailoring our exercise program to your personal needs and goals, and will encurage you to set you goal high. Our program is designed to do twice a week, for six weeks in total. This is the only way to ensure good outcome and better health benefits.

“Consistancy will increase your resiliency”

Most people have set goals like “moving pain free”, or “be able to work and walk without pain”, when they consult a physiotherapist. But at ArenaFysio we like to focus on higher goals, as we believe in our vision: Movement as Medicine.

Movement, or exercise will help you to increase your health and wellbeing. And Physio Pilates is an execelent tool in our program of rehabilitation of (chronic) low back pain patients, or patients who suffer long term muscle- and joint problems. 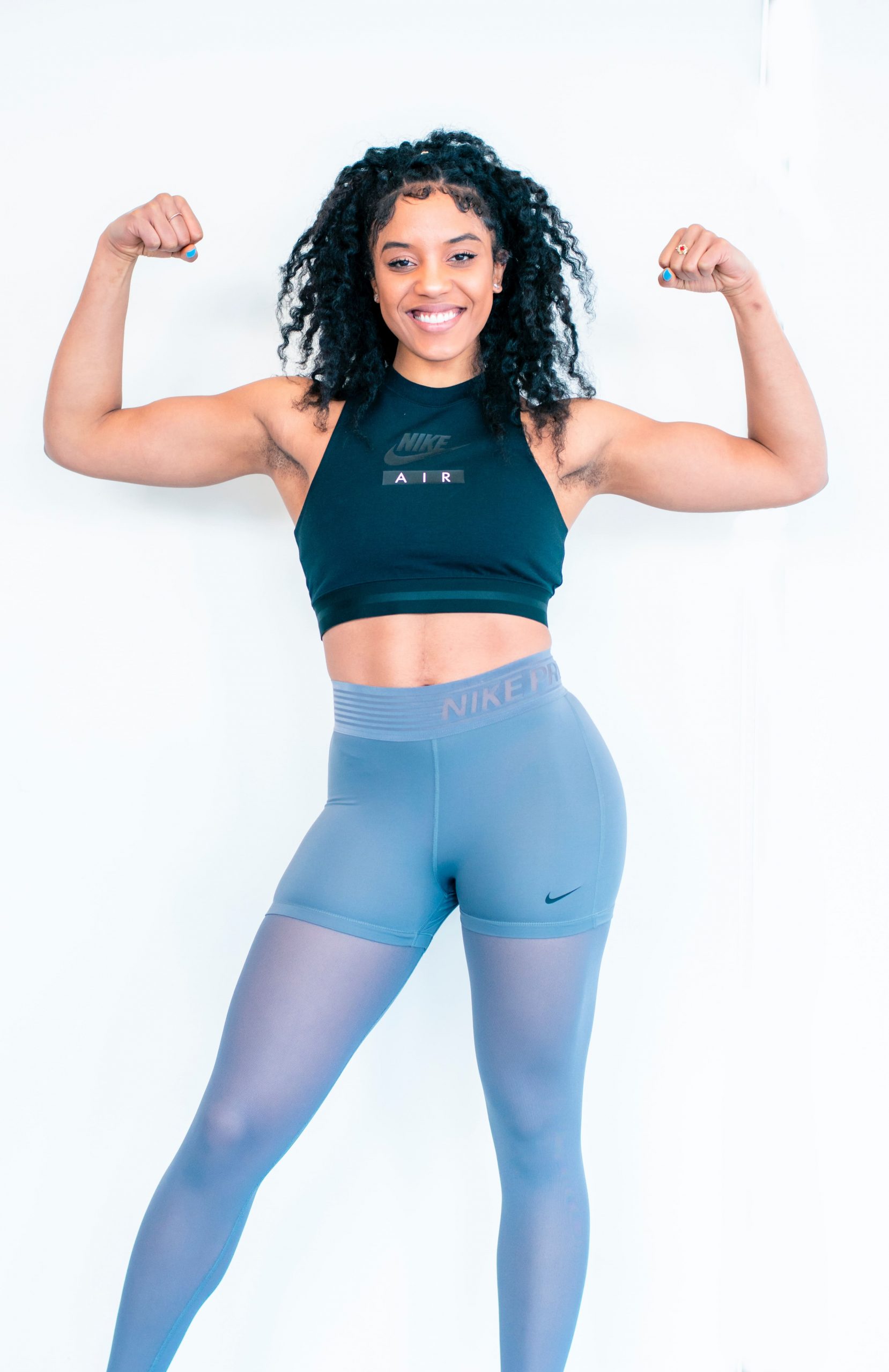 There are numerous benefits to be gained from performing Clinical Pilates exercises. Some of these include:

Last words from our specialist

We hope you enjoyed reading this blog and got informed about our sevice Physio Pilates. Please let us know if you want some advice.

Part 2 of this blog serie, will be focussing on the first few, basic exercises, so you are able to start practicing Physio Pilates at home during these quarintine days.

We hope to see you at our clinic in the near future! Please, contact our physio’s when you suffer an injury at the moment, or any other question. 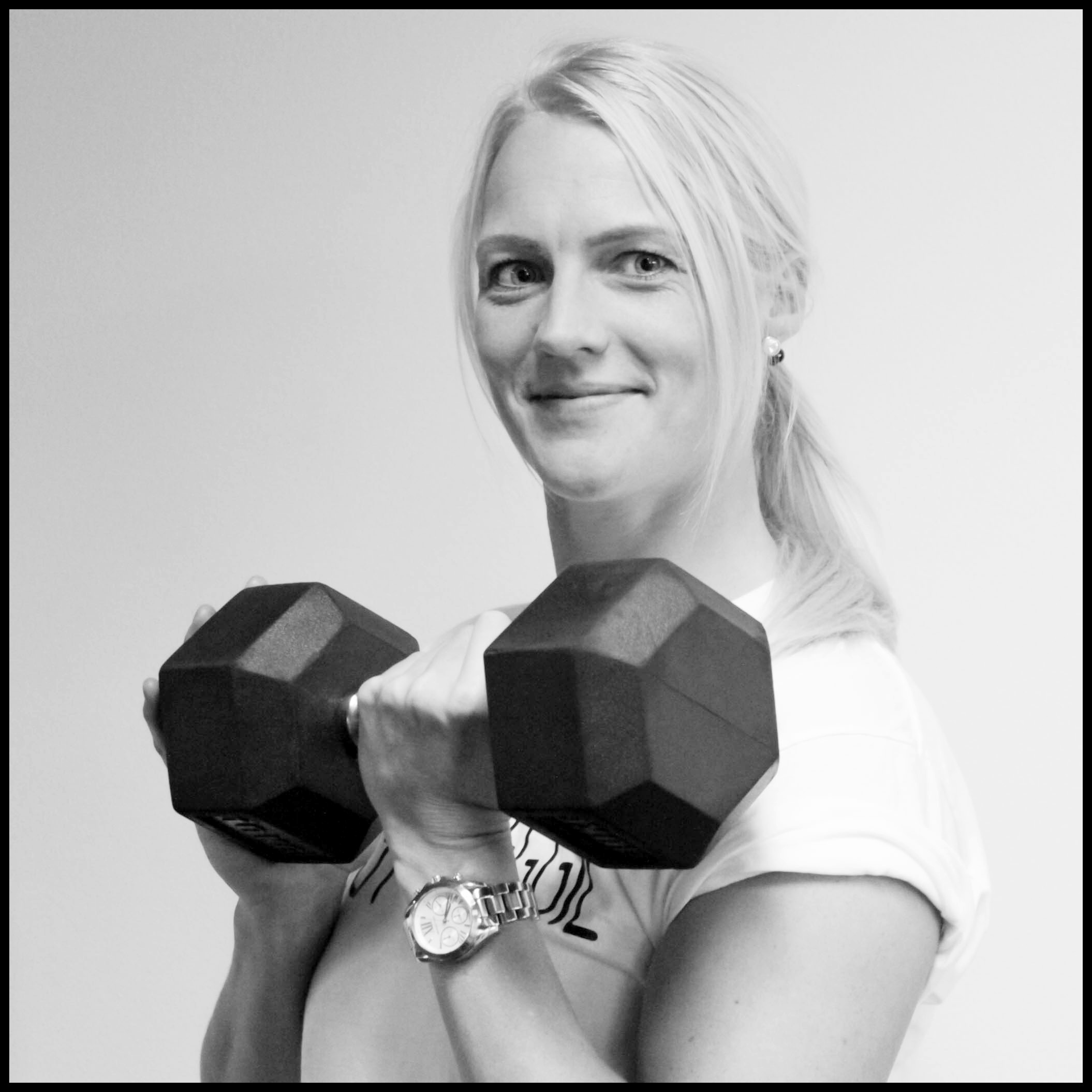 Disclaimer: This information is carefully sepected. But the information might not fit your circumstances. Therefore we advice you to contact our physiotherapist or your doctor if any questions rise.

Copyright: Copyright on this document. Nothing can be copied without any notice to the author ArenaFysio. You may share this document – Please do!